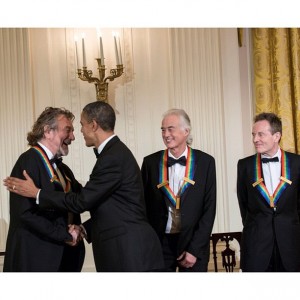 The three surviving members – Robert Plant, Jimmy Page, and John Paul Jones – were presented with their awards by the President. They did not play, however a few other bands did play Led Zeppelin songs.

Led Zeppelin will also be appearing on David Letterman tonight (Dec 3rd). No word on if they’ll be performing.

Their last performance as a group was in 2007, with John Bonham’s son Jason filling in on drums.

What if "Bros." is his last name? - Justin Shortt