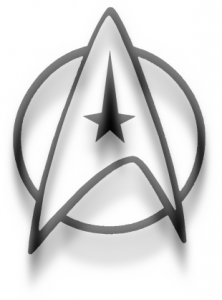 (Check out the previous episode of ‘Star Trek: The Dividing Line’ here, and be sure to read Jake’s ‘Star Trek: Not Just For Nerds’ here.)

So I promised in the previous article that in Episode II of The Dividing Line we’d take a look at the difference between TNG and Enterprise – and the similarities between Enterprise and TOS. So let’s get right to it.

Star Trek: The Next Generation had a cast full of interesting characters. Picard was a great captain, and Riker made the perfect Commander. Data was certainly interesting, and the friendship between he and Geordi was well-written most of the time. Q, for me, was hit or miss. Sometimes I liked him, other times he just bored me. 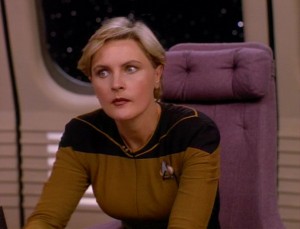 And then there were the characters that I found myself wishing would get beamed down on an away mission and killed by the Gorn. Counselor Troi, for one. As much drama as there was on this show she should have never been on the bridge. If the neuroses were that apparent on the bridge, what the hell was going on in the rest of the ship? And then there was Lieutenant Yar.

Anyway, it seemed to me that while the characters were interesting and worked well together as a team, the show just lacked that camaraderie that made Star Trek (The Original Series) so good. Kirk, Spock and McCoy – any of them would gladly have given their lives to save one of the others. (Yeah, yeah, the needs of the many, etc.) That was lacking in TNG. Sure, each of them obviously cared about the rest of the crew, else we’d have had no trial over Data being a life form or property (or that awesome episode when Wesley wouldn’t keep off the damn grass). The (for lack of a better term) bromance factor was missing in Deep Space Nine and Voyager as well. 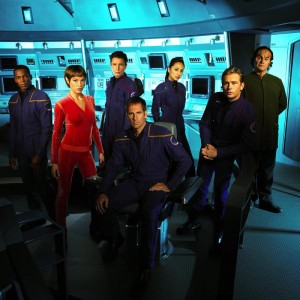 Star Trek: Enterprise was a return to form. You had Captain Archer and Commander Tucker, who were almost inseparable. Throw in Lieutenant Reed, and you’ve got yourself a modern-day (prior day?) Kirk, Spock and McCoy. Sure, Reed and Tucker didn’t get along, but neither did Spock and McCoy. They would bicker and argue, but at the end of the day either of them would have laid down their life for the other.

While the other shows (DS9, Voyager) did have their share of inter-crew relationships and bonds, they just didn’t have what Enterprise (and TOS) had as far as bonds between the characters. Sure, Julian and Chief O’Brien had a friendship, but it paled in comparison to the others.

So basically, we have two different types of show: action/adventure, and action/cerebral. Is one better than the other? Definitely not. It’s completely up to the viewer as to which is better. And that’s okay – people are allowed to have different opinions. Once again, Justin has admitted enjoying some of the episodes of Voyager, and we still like him. 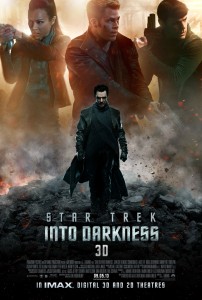 So many people have groaned and complained about the new movie, Star Trek: Into Darkness, based solely on the movie poster seen at the right. Their complaints? “They have guns! They’re not wearing Trek uniforms!”

I won’t go into the reasons that these arguments bug me, but suffice it to say I think they’re very, very weak. In a time where people clamor to the internet for spoilers (and then complain when they get them), I think we’re better off just waiting to see what happens. (Bestselling Author Brandon Hale actually did an article on the speculations about Into Darkness right here.)

So basically, when it boils down, my question is, “Can’t we all just get along?” We all love Trek, be it the action and adventure of Archer, the strictness and order of Picard, the brains of Sisko, the…um…well, Janeway. And of course, Kirk and Spock are what started it all (in real time, not stardate time!).

I, for one, will be at Into Darkness opening weekend, guns and trench coats be damned. And I hope no matter which Trek is your favorite, that you’ll be there, too.

RIP, Dick Clark. I don't know who got you, but we can only hope Connor will avenge you. - Brandon Hale