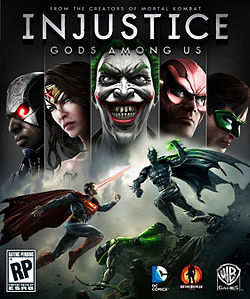 The first thing you have to know about me is, I’m not really a gamer. I like video games, but I rarely play them and even more rarely buy them. I have an XBox 360 and I use it mostly to watch movies. And when I DO buy a game, it’s usually used or I’ve waited a long time for the price to go down.

The second thing you have to know about me is I’m REALLY a fan of DC Comics. I am a Superman fan first and foremost, but I also love Batman, Wonder Woman, Green Lantern, etc.

So it should come as no surprise that when I heard about a DC fighting game, I was all fired up.

Third thing: I suck at fighting games. Since I don’t play games much, I’m not very good at them. Which is fine, since I have to REALLY like a game to invest the time and energy to get good at it. I never owned any fighting games, ever, although I have played them.

Now that we’ve covered the things you need to know, let me just say that ‘Injustice’ was worth every penny I spent on it.

And I spent: I pre-ordered it with the Red Son pack, bought the season pass, just basically went all out. 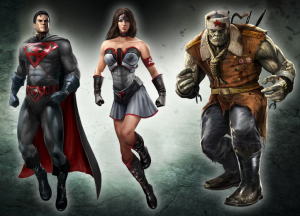 The actual game itself is pretty basic: you fight. A LOT. But the story, while brief, is actually pretty cool. Basically, you find your Super Friends in a parallel world where the heroes have gone bad. You play as pretty much all the classic superheroes and a few of the villains. It’s a very messed up reality, which is disturbing in terms of how bad it can get when the most powerful beings in existence stop playing nice.

Now, it obviously makes no sense that, say, the Joker could fight Superman. But the game sidesteps that by adding a plot device where everyone is given super strength. But really, you won’t care.

The fights are great. Each character his his or her own style, which means characters you might easily defeat playing as one hero are very difficult playing as another. The design looks great, with familiar yet fresh takes on the Fortress of Solitude, Batcave and the like.

Now, a friend of mine said something to the effect of, “I usually HATE fighting games, but this is a DC game first and a fighting game second.”

And if the fighting game stuff gets old, you can click over to the S.T.A.R. Labs section and do missions which involve a lot of different gameplay styles. Add to that the skins (that is, alternate costumes) and you have a rich and varied experience.

The folks behind ‘Injustice’ did their homework: the characters and settings feel RIGHT. Even the special fighting moves are evocative of each character’s style and personality. So Batman acts like, well, Batman. 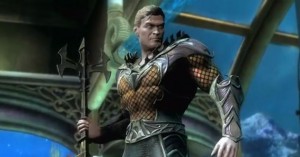 But the most important thing, the thing I haven’t mentioned until now, is this:

Aquaman is a bad motorscooter.

All too often, Aquaman is treated like a joke. Not here. The ‘Injustice’ Aquaman is arguably one of the best characters to use; if you handle him right, he’s virtually unbeatable. Finally, the King of the Seven Seas gets a little respect!

So if you like fighting games, then this is basically ‘Mortal Kombat’ with superheroes. If you’re a DC Comics fan, then you’ll be in for a treat. Either way, ‘Injustice: Gods Among Us’ is highly recommended.