What a weekend we’ve had in football! We’ve had a National Championship Game, bowl week and the first round of NFL playoffs! I missed last week because I was sick, and I still am, but the show must go on. If you’ve got the stomach flu or the bad cough that’s going around, I feel for you. 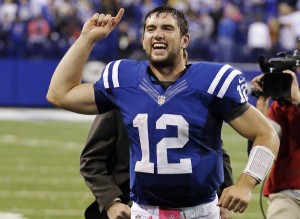 First in the NFL, we have a rumor that there will be a Wild Card team added to each conference. What will this mean for the playoffs in the future? Will we re-do all of the divisons? Who knows, but let’s keep that in mind after this season. A record 30.8 million people tuned in Saturday to watch the Wild Card matches on NBC. That’s unreal, but it goes to show what happens when teams you didn’t expect to show up make it. Andrew Luck certainly wasn’t expected to take it to the Chiefs like he did, but he came through like a monster, picked up a fumble and scored it himself in his come-from-behind win. Drew Brees came through and sent the Eagles home for the year, San Diego beat the Bengals, and the 49ers beat the Packers in the freezing cold. Next up, we’ll see New Orleans at Seattle, Indy at New England, San Francisco at Carolina and the Chargers at Denver. This sounds pretty promising! 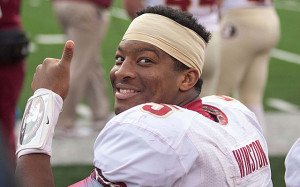 In the NCAA, wow, what a finish! Florida State scored a ton of points in the 4th quarter to come from behind and take their title from Auburn. Jameis Winston lived up to his Heisman trophy, driving like a soldier with about a minute left to snatch victory from the jaws of defeat and remain unbeaten. In other bowls, we had some major upsets, like the Sugar Bowl, where Oklahoma beat Alabama, the Fiesta Bowl where UCF beat Baylor and the Orange Bowl where Clemson bested Ohio State. Michigan State took out Stanford in the Rose Bowl, and Missouri won the Cotton Bowl over Oklahoma State. A couple of other notable games are Oregon over Texas in the Alamo Bowl, South Carolina over Wisconsin in the Capital One Bowl, Nebraska over Georgia in the Gator Bowl and Kansas State over Michigan in the Buffalo Wild Wings Bowl. It sucks that college football is over for the year, but man what a way to go out. We’ll see you all next week, after another round of NFL playoffs!

(Reuters) – Methane gas from 90 flatulent cows exploded in a German farm shed on Monday, damaging the roof and injuring one of the animals, police..